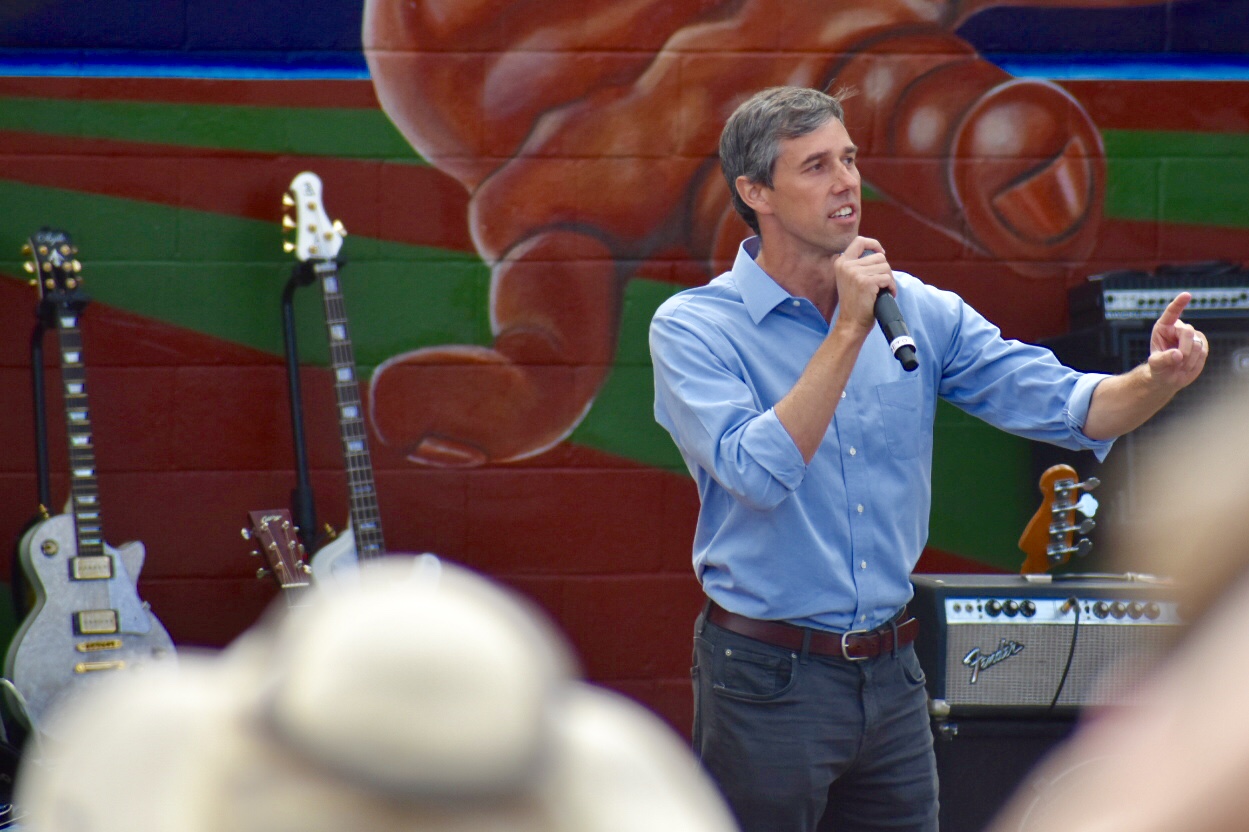 by Cristian Spariosu and Natalie Valachovic

Beto O’Rourke was the long-shot candidate in Texas’s 2018 midterms elections. As a Democrat in deep red and conservative Texas, a tight race for Congress is usually not heard of. But Beto and Ted Cruz had the closest political race in Texas in forty years. Although Beto narrowly lost to Ted Cruz, his name became known across the country and with this attention came a feasible path for the 2020 presidential election.

The close race in Texas in the 2018 midterms between Beto O’Rourke and Ted Cruz lead to national attention. If Beto could close in on a Republican in a deep red state, then maybe he could be the Democrat that would take down President Donald Trump?

Not only did he receive national coverage for his run against Cruz, but he also gained recognition for being a strong fundraiser. He topped fundraising records in the midterm elections, ending with $80 million, which was impressive for someone who used to not be well-known outside of El Paso Texas.

In his announcement for running for president, Beto O’Rourke looked to rally voters on issues such as climate change and the treatment of immigrants at the southern border. He also used his run in Texas as an example of the type of campaign he will have and how he can bring people from both sides together.

Coming off of his 2018 campaign, there was also a lot of celebrity support for the new Democrat star. He was a favorite of Oprah Winfrey and cheered on by President Barack Obama. Beto also was on the cover of the magazine Vanity Fair, with the headline about his 2020 presidential “I want to be in it. Man, I’m just born to be in it.”

Beto, carrying the stamina that he gained from his highly contested Senate race that he lost to Ted Cruz by a mere 2.6 points, felt energized to embark in his race to capture the 2020 Democratic nomination. Joining the race on March 14, 2019, a staggering $6.1 million was racked in through online donors during the first twenty-four hours of his newly launched campaign and he was able to raise a total of $9.3 million during the first quarter of 2019.

So, what happened? After dropping out in early November of 2019, Beto was falling drastically behind in both fundraising and support. He was not going to be able to qualify to be in the November 20th candidate debate, a big difference from how his run against Cruz looked. The “Betomania” took a nose dive into one of the many failed 2020 campaigns.

To start, we can look at how Beto O’Rourke switched around his main policy goals, which made him start to seem flip-floppy. The Washington Post criticized him as not being clear on what his heart was telling him. Starting moderately on certain issues while running in Texas shifted to some extreme views that others in the Democratic party questioned. For some independents and moderates, hearing “Hell yes, were going to take away your AR-15, your AK-47” was a large shift from the moderate Democrat in Texas that gained so much traction.

As O’Rourke’s campaign slowly started to lose stamina, partly due to the lack of effective campaign organization, his fundraising was not as strong as it used to be. During the second quarter of 2019, he raised an underwhelming $3.6 million. According to Max Greenwood from The Hill: “O’Rourke’s total amount raised since declaring his candidacy to more than $13 million, his campaign said. He received 119,888 contributions in the second quarter alone, with an average donation size of about $30”.

Beto was able to qualify for all debates up until he dropped out in the fall, which requires candidates to collect campaign contributions from at least 130,000 individuals and score 2 percent in four qualifying polls. German Lopez from Vox mentioned: “…between his awkward Spanish and several moments where he just looked outclassed on immigration, an issue he was supposed to really stand out on… He had no breakout moments. He was never at the center of the conversation…”. For the majority of Beto’s campaign, he was on life support polling at low, single digits in almost every poll during the entirety of his run. Ultimately, poor performance in the polls and a weak fundraising game led to Beto dropping out of the race on November 1st.

Surprisingly, Beto has a strong following for some progressive voters, so an endorsement to one of the current candidates can shift a lot of support towards them. Considering that fellow Texan, Julian Castro endorsed Elizabeth Warren for President, it would not be a shocker if Beto followed the same footsteps and endorsed her as well. Warren has a plethora of progressive policies that align with Beto’s vision for the nation such as her stance on more strict gun control legislation. Being a strong, outspoken woman who has proven to be fierce on the debate stage might also sway Beto into endorsing her.

Another possible endorsement that Beto could very well make would be to Senator Bernie Sanders simply due to his immense popularity that is fueling his campaign. Sanders’ recent sweep in Nevada makes it likely that more big names in the political field will have the confidence to endorse him even if his ideology does not align with the traditional DNC.

Betomania could not propel O’Rourke into the oval office. Today his political path is unclear, although some were encouraging him to run for Congress again in Texas. Although he had some strong followers, most saw him as ungenuine in the political race, costing him support and his bid.