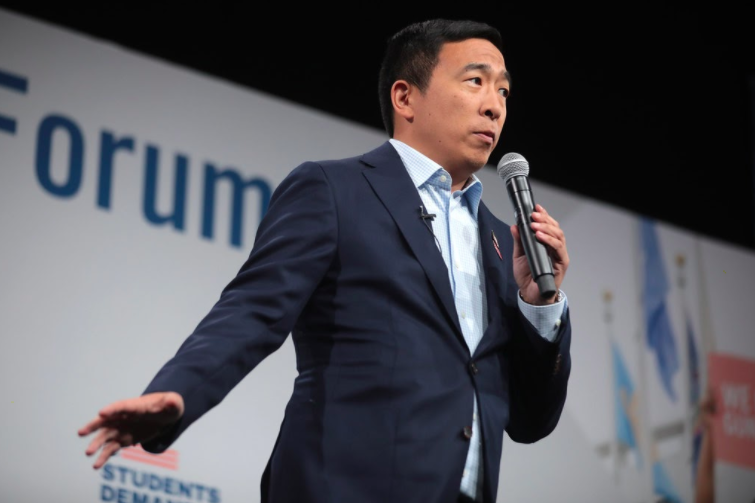 by Zachary Coderre and Christina Noeldechen

After a long time on the campaign trail, Andrw Yang’s bid for president has come to an end. To call Yang’s presidential candidacy a longshot would be an understatement. Here was a candidate with no government experience, no military experience and a highly unusual campaign message. Given his non-traditional presidential resume and the obvious challenges that he would face on the campaign  trail, the question must be asked, why did he run in the first place? According to Yang, the reason he ran was because he felt that he had a diagnosis and cure for America’s woes that no other candidate could offer.

The problem, according to Yang, is the ever increasing automation of the workforce. Yang’s proposed solution to this problem was a Universal Basic Income that he named the Freedom Divided. The policy would give every U.S. citizen over the age of 18 an allowance of $1000 a month. The Freedom Dividend was the beating heart of the Yang Campaign, serving as his signature policy proposal. It is impossible to separate Yang’s candidacy from UBI, because he ran as the UBI candidate. While his campaign ultimately failed, he has succeeded in raising awareness of the UBI and there is some evidence to suggest he made the policy more popular than it was before he ran.

Yang initially gained support from a small but loyal following of people on the internet who liked his ideas and outsider status. That group formed the base of the so called “Yang Gang” the name given to those who strongly supported Yang’s presidency. Given their internet roots, it’s not surprising that most of his support (74%) was concentrated in the under 45 demographic. It’s noteworthy that this group of people are not ideologically homogeneous. The Yang Gang is composed of self identified progressives, moderates, libertarians and conservatives. Despite the varied ideological mix, most of Yang’s supporters were male. Andrew Yang’s coalition also contained about 19% of the Asian American primary electorate. This makes sense in light of the fact that Yang’s campaign went further than any Asian American candidate in history.

Yang’s strategy consisted of promoting his UBI message through his knowledge of internet culture and leaning into the novelty of his campaign. Appearances on popular podcasts like the Joe Rogan Experience helped him generate the internet buzz that gave him his following and source of funding. Andrew Yang’s fundraising efforts, primarily from internet donations, successfully got him onto the debate stage and gave him resources for Iowa and New Hampshire. During the third democratic debate, Yang announced that he would be giving 10 people $1,000 a month as a case study for his UBI proposal. This campaign strategy served two purposes. It both gave Yang’s campaign positive news coverage (who doesn’t like free money?) and it allowed Yang to discuss how his UBI program would change people’s lives. That was the message that he ran with during his 17 day bus tour in Iowa. At the end of these events, the campaign would pass out cards asking voters to rank their candidate preferences from before the event and after the event.

Andrew Yang is an incredible speaker, and captivates his audience through his charisma and charm. However, it was not enough to keep him running in the 2020 Democratic Primary. After his disappointing Iowa Caucuses finish, Yang knew he was in for trouble in New Hampshire. Recieving 1% of the Iowa vote, Yang fired dozens of his staffers. Among those dismissed were the national political and policy directors of the campaign, as well as the deputy national political director. In fact, all those dismissed were senior positions, which leaves the rest of Yang’s campaign in an awkward place, questioning what their next move will be. Despite his investment of time and money, Yang left Iowa with depleted resources and a smaller campaign.

The majority of Yang’s campaign staff lacked political experience. According to a former staffer, “…there was a lot of insecurity with senior leadership not having the experience of doing this before. And so oftentimes they didn’t really know what they were doing”. As Yang’s campaign grew, and more staffers with political experience joined, there were major communication problems within the campaign. This led to internal infrastructure conflicts, which were evident through the quotes from former staffers. Despite the communication issues, Yang’s Iowa campaign was successful in growing support. According to another laid off staffer, “The organization was a mess, but it still managed to do incredible things while being an absolutely f—ing disaster.”

Sadly, these problems were visible in his New Hampshire campaign as well. After using the majority of his resources, Yang lacked the kind of infrastructure in New Hampshire he had in Iowa, which led his aides to expect another less than stellar finish. After his loss in New Hampshire, Yang felt that he could no longer justify taking money from his “Yangsters” and explained to them, “While there is great work left to be done, you know I am the math guy, and it is clear tonight from the numbers we are not going to win this race”. Yang added that he is not someone who wants to accept donations and support in a race that he will not win.Now the question arises, where Andrew Yang is going now? Recently, Yang joined the CNN team as a political commentator. He tweeted that he was excited to join CNN to “help shed light on the election and the candidates’ experiences”, following the announcement by the network. While Yang’s long term plan’s are unclear, for the time being his uniquely comedic style will bring an interesting spin to CNN’s coverage. According to campaign officials, there is room for a political comeback. His charismatic personality has led other campaigns to appoach him for endorsements, and Yang told CNN he would be honored to serve as someone’s running mate. It’s safe to say this is not the end of Andrew Yang and his #YangGang. His gimmicks aren’t over as he promised the #YangCurious public that he’ll be back and playfully hinted at a Presidential 2024 campaign.